I Agree
How Does The Arkansas Supreme Court Work? | ArkansasCourtRecords.us
Arkansas Court Records

How Does the Supreme Court of Arkansas Work?

After the court grants a petition or review, the clerk notifies all attorneys involved to submit six paper copies of the briefs previously presented at the appeal court. The Arkansas Supreme Court allows any party to request for oral argument within ten days after it grants the petition or review. The party must submit the request to the clerk and the other parties involved in the case.

Oral arguments may be included as part of the Supreme Court’s proceeding, depending on whether the court grants the request. Arkansas Supreme Court decisions are available on Thursdays at 10 A.M during the Court term. The court term lasts from the first week of September to the first week of July. However, four of the justices must agree on any decision, and Justices may meet during the summer to consider court actions. The Arkansas Supreme Court sessions and oral arguments are open to the general public. The court is located at:

Alternatively, interested persons may stream the sessions on this website. After the entire Court process, the clerk disseminates the opinions or orders of the Supreme Court to the parties.

In Arkansas, any case is subject to reassignment by the Supreme Court. This means that the Arkansas Supreme Court has the authority to transfer the right of handling a case from one Judge to another. However, the Supreme Court can only exercise this right when there are issues of perceived inconsistency, substantial public interest, constitutional interpretation, issues needing clarification, issues of first impression, or issues concerning the interpretation of an act of the General assembly.

The Supreme Court may also transfer cases to the court of appeal and vice versa. Still, the court of appeal can only do the same when the case is not within its jurisdiction under rule 1–2(a), or the case involves significant public interest. The Arkansas Supreme Court plays an administrative role over the practice, organization, and regulations of court rules and proceedings in the state.

The Supreme Court also controls the activities of the Arkansas Access to Justice Commission, Arkansas Code Revision Commission, Committee on Civil Procedure, Committee on Criminal Practices, State Board of Law Examination, Board of Certified Court Reporter Examiners, and many more.

The Arkansas Supreme Court is made up of seven justices elected to eight-year terms in nonpartisan elections. The Arkansas Supreme Court Justices election system ensures that the entire court is not replaced in one election. This means that all the judges can not have the same service period. The justices include the Chief Justice, Vice Chief Justice, and five associate justices.

To be qualified to serve as justice in the Arkansas Supreme Court, a candidate must be at least 30 years of age and a U.S citizen that has been living in Arkansas for more than two years. The candidate must have also practiced law for at least eight years before the election and must be of good moral character. Justices of Arkansas Supreme Court, including the Chief Justice, serve a single term; hence, they cannot contest the position again.

Arkansas Supreme Court dockets and records are available to interested persons in the state. These records are grouped into the following

Requesters access the information by providing the case ID, docket ID, date, court code, and location Code. For information on a particular case, interested persons may locate records using the full name or business name of a party involved in the case. Alternatively, requesters may search for information on Supreme Court judgments using a name, court judgments, date, and status.

Additionally, interested persons may also visit the display case information and activities page or filed cases page for more information. Note, the AOC website is unavailable for routine maintenance from Fridays 12:30 A.M to 2 A.M and Saturdays at 10 P.M.

To access information on the library, interested persons may call (501–682–2147) or send an email to the library management. The Arkansas Supreme Court library also allows in-person requests. However, before such visits, the library must be certain that the information requested can not be provided through a virtual means. To make a walk-in request, book an appointment and visit the library at: 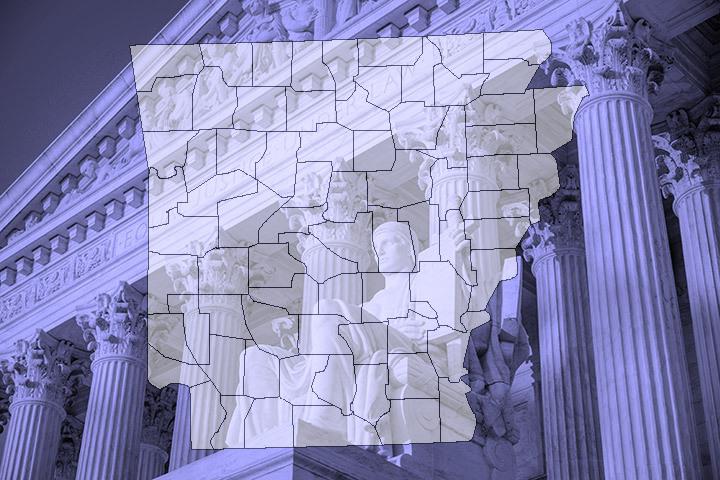