What Are Arkansas Traffic Court Records?

Arkansas traffic court records consist of records generated during the legal proceedings arising from motor vehicle code violations as well as violations of state traffic laws and local ordinances. This includes case files, evidence reports, and other records. All records related to the processing of moving and non-moving violations also fall under this category.

Records generated from traffic courts are categorized as public records except when restricted by a court or the law. Records created from the proceedings of “courts of public record” in Arkansas, are classified as public information under public access to information law and are subject to be accessed by members of the general public.

Getting a Traffic Ticket in Arkansas

An Arkansas traffic ticket, otherwise known as a Uniform Traffic Ticket and Complaint, is a notice issued by a law enforcement officer to a motorist or road user for Arkansas traffic infractions and violations of the state’s motor vehicle code, statutes, and ordinance. It is a representation of the officer’s observations of the alleged incident. The ticket will be completed by the officer, before being issued to the offender. The ticket will indicate the date, time and location where the ticket was issued. The ticket will contain the full name of the offender, address and other relevant bio-data. The offender’s driver’s license information will also be listed on the ticket along with the description of the vehicle involved in the violation. The officer will list the offense (including section and statute number) the offender is being accused of, and indicate if a court appearance is required with the date, time and location for the appearance. The offender will sign, before receiving a copy of the ticket, as an assurance of responding to the ticket or appearing in court. The officer will also sign and indicate his ID and agency on the ticket.

Traffic violations in Arkansas can either be civil infractions or misdemeanors. Civil infractions come with the possibility of fines and demerit points, upon conviction. Misdemeanors come with fines and demerits upon conviction but also come with the possibility of jail time. Fines, surcharges and court fees tend to vary by violation and district court. If the fine amount is not noted on the ticket, contact the listed court for details or check on the court’s website and search the database by full name and driver’s license number or date of birth or case-type. Under the Case event schedule of the results, an event notice indicating Plea & Arraignment means a court appearance is not required, while a notice for mandatory court necessitates a mandatory court appearance. If the citation has 3 or move moving violations or 4 or more violations listed on it, then a mandatory court appearance is required.

Arkansas employs a points-based system to monitor driver’s records. If an offender is convicted of a traffic violation, points will accrue on the offender’s record based on the type of violation. If a driver accumulates 10–13 points, the driver will receive a warning letter from the Arkansas Driver Services Division. Accumulating 14–17 points may result in a 3-month suspension, 18–23 points may result in a 6-month suspension, while 24+ points will result in a 12-month suspension. Convictions for moving traffic violations will be reported to the Arkansas Driver Services and will show up on your driving record.

What to Do When You Get a Traffic Ticket in Arkansas?

Upon receiving a traffic citation in Arkansas, you are expected to respond to the ticket by the date indicated on the ticket. You can decide to either

Paying the ticket is seen by the law as a Guilty or No Contest plea and the court will treat it the same. A response, in this case paying off the ticket, must be made by the hearing date indicated on the ticket. If the offense does not carry a mandatory court appearance, the ticket can be paid online, by mail or in-person.

If the ticket was not issued for a major offense, the judge may allow the completion of a defensive driving course to offset the ticket. The defendant will need to be eligible for this option, and if so the court will provide information on approved schools, time limits and any additional costs.

Contesting the ticket is seen by the law as a Not-guilty plea and a choice to exercise your right to trial. There might be slight variations in the process, depending on the court the case was assigned to. Some counties enable the Court’s Clerk to set a trial date when a response is made and a Not-Guilty plea is entered before the court date. If this is not possible then the offender must appear on the scheduled court date for arraignment, after which a trial date will be set. The defendant will be expected to defend him/herself, though it is advisable to retain the services of an attorney by this point.

At the trial, the defendant will be allowed to call witnesses, enter evidence and question the law enforcement representative. Upon completion of the trial, a verdict will be rendered by the judge. If the judge renders a verdict Guilty verdict, the defendant has been convicted on the charges and will be liable for the fines and have demerit points added to their driving record. There may be additional charges and costs accruable as a result of the trial. If the judge renders a Not Guilty verdict, then all charges will be dismissed and no fines, demerit points are accruable to the defendant and he/she will be freed. There might still be court costs accruable as a result of the trial.

Failure to respond to an Arkansas traffic citation by the scheduled date, indicated on the ticket, will result in added repercussions which can include a license suspension and an arrest warrant being issued against the defaulter.

How Do I Find Arkansas Traffic Court Records?

Traffic court records can be gotten from the Clerk’s office of the court where the case in question was heard. Requests can be made online using the Court’s website or in-person, by visiting the office of the court and filing the request physically.

What information is required to obtain Arkansas Traffic Court Records?

The most pertinent information required to obtain an Arkansas traffic court record is the full name on the record and the case number for the record. The person requesting the record will also need to provide a state-approved and valid form of identification, to receive the record. Court costs may be applicable when requesting court records, more so if the requestor will require copies of the record.

Are all Traffic Violations handled the same way, in Arkansas?

Can Arkansas Traffic Records be sealed or expunged?

In Arkansas, defendants may apply for misdemeanor expungement, to seal records, whether the outcome was a guilty verdict or a not guilty verdict, or if the charges were dropped. Most misdemeanors are eligible for expungement on completion of the sentence. This includes after release from jail, end of probation, full payment of all fines, charges or restitution owed. A petition for expungement can be filed once this has elapsed. If the petition is denied, 90 days must pass before another petition can be re-filed.

A DWI (Driving While Intoxicated) charge must have elapsed by 5 years before a petition for expungement can be filed. If the petition is denied, 1 year must elapse before the petition can be re-filed.

How does one end up in an Arkansas Traffic court?

One may end up in an Arkansas traffic court when a ticket is issued for a traffic violation by a law enforcement officer and the offense being cited for, requires a mandatory court appearance to respond. One may also end up in traffic court if one wishes to plead Not Guilty and contest the charges by trial in court.

Which Courts in Arkansas have jurisdiction to hear traffic violation matters?

Traffic violations and related matters, in Arkansas, are heard in District Court. District Courts are courts that exercise territorial jurisdiction within judicial districts. They are served by full-time judges and have subject matter jurisdiction over traffic violations, misdemeanors and violations of state law and local ordinances, where the amount in controversy is not above $25,000. 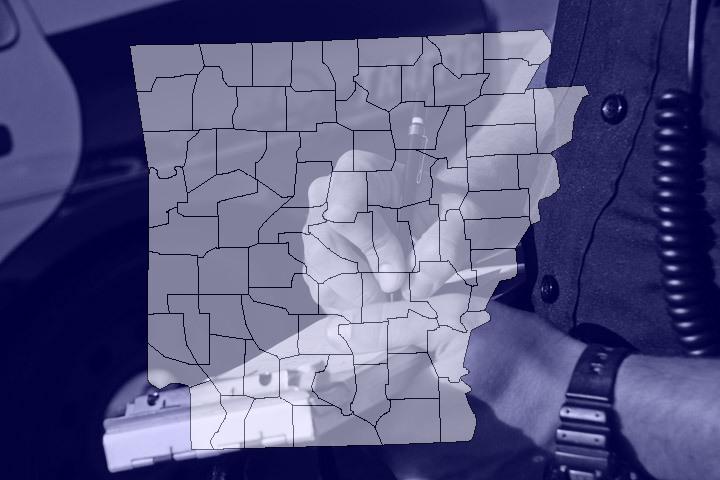