I Agree
The Difference Between a Divorce an Annulment in Arkansas | ArkansasCourtRecords.us
Arkansas Court Records

The Difference Between a Divorce and an Annulment in Arkansas

Two legal procedures end marital unions in Arkansas: divorce and annulment. For the most part, these procedures are similar in outcome of a person’s marital status—upon issuance of a decree of divorce or annulment, one’s marriage is lawfully terminated. However, there are some differences between the two, including the legal reasons which can be used to obtain either decree and relief granted to spouses. The major distinction between them is that while an annulment ends an invalid marriage and pronounces it never to have existed, a divorce ends a legitimate marriage. These cases are heard by the Arkansas Circuit Court.

What is an Arkansas Divorce Decree?

In Arkansas, a divorce decree is issued whenever the court finalizes an individual’s divorce. This decree outlines the rights and obligations of both divorcees in matters of custody, support, visitation, and debt/property division, as well as basic information of such parties and the case, including full legal names, case number, date of filing, and county of divorce. Typically, an Arkansas divorce decree cannot be altered after being signed by a judge and filed with a Clerk of Circuit Court unless for matters of parenting time (visitation), support, or custody.

The records contained in documents related to family court include both marriage and divorce records. Both types of records contain information that is considered very personal to the parties involved, and it is recommended that those parties maintain these records with care in order to make changes in the future. The personal nature of these records results in both being considerably more difficult to find and obtain when compared to other types of public records. In many cases, these records are not available through either government sources or third party public record websites.

What is an Annulment in Arkansas?

An annulment in Arkansas is a legal declaration that an individual’s marriage is null and void. Before the Circuit Court can issue an annulment decree, an individual must meet specific legal requirements (grounds) detailed by Ark. Code § 9–12–201 and must be able to prove any ground that a petition is based on. The annulment grounds in Arkansas are as follows:

Unlike divorce records, Arkansas statutes and court rules do not provide for the availability of annulment records to the public.

Annulment vs Divorce in Arkansas

Arkansas law gives spouses two legal procedures to end their marriages. While annulment and divorce actions have similar court processes and lead to the same result, which is that two persons can end their marriage and legally remarry, there are a few differences between them. For example, the legal effects, grounds, and remedies.

An annulment not only ends a marital union between two parties but it declares that the marriage was nonexistent in the first place. Also, an order of annulment restores individuals to their original status (unmarried) before the marriage ceremony happened. Meanwhile, a divorce just ends an existing marriage without erasing the evidence that a wedding license was issued. Typically, spouses can only annul a marital union if it was seemingly valid at the point of inception but is legally void in the eyes of the law. It is not possible to annul a legitimate marriage in Arkansas. Any person who wants to terminate a valid union or who cannot establish the grounds for annulment must petition for divorce instead.

Spouses have to demonstrate certain legal grounds, and in the case of divorce, meet the state’s residency requirement, before any court of law may issue a decree authorizing the dissolution or termination of a marriage. The grounds for annulment are listed above. Below are the grounds for divorce in the Arkansas (Ark. Code § 9–12–301(5)):

In divorce and annulment proceedings, a judge can decide child custody, support, and visitation rights. Typically, only persons with legitimate marriages may be awarded alimony or spousal support. However, in certain cases, the court may award temporary support for annulment cases. Furthermore, the court can only divide marital debt or property in divorce, not annulment, proceedings. For this reason, it is important to speak to an attorney to know one’s legal rights before pursuing an annulment in court.

Is an Annulment Cheaper Than Divorce In Arkansas?

No, an annulment is not cheaper than a divorce in Arkansas. The cost of both legal proceedings differs by case and is dependent on the speed at which a case can be finalized. Typically, cases spend more time in court when one party contests the petition for a divorce or an annulment, or terms of it. When this happens, litigation costs and fees will increase as well. If an annulment will be more difficult to obtain, it may be advisable to file for divorce initially to save time and money.

What is an Uncontested Divorce in Arkansas?

An uncontested divorce in Arkansas is one where both spouses agree on the cause and terms of their divorce. These terms include spousal support, child custody/support, property/debt division, and parenting time. A divorce may also be uncontested when the non-filing spouse fails to respond to the petition within the period given by law. This type of divorce tends to be cheaper and faster than contested divorces because spouses decide on marital issues out of court and without a trial.

Where to Get an Uncontested Divorce Form in Arkansas

In Arkansas, the availability of uncontested divorce records to the public depends on the government agency (courts or Department of Health) with control over record dissemination. Generally, court records can be accessed online or in-person while records maintained by the Arkansas Department of Health are available only to eligible persons such as the spouses and their lawyers, immediate family, and public agencies.

How Do I Get a Copy of my Divorce Decree in Arkansas?

A divorce decree is a legal document and therefore maintained by the court where one’s divorce was finalized. Anyone interested in obtaining an Arkansas divorce decree may visit the applicable courthouse to make the request. The Clerk of Circuit Court may also be contacted to find out record inspection and copying procedures. The address and contact information of Arkansas Clerks of Court can be found on a directory published by the Arkansas Judiciary.

How Do I Get an Arkansas Divorce Decree Online?

In Arkansas, members of the public can find divorce decrees online through CourtConnect, a portal operated by the Arkansas Administration Office of the Courts (AOC). Individuals may search and view decrees of divorce, as well as other basic case information, with a subject of record’s name, the case/docket filing date, or the case ID. It should be noted that these decrees are not the official court records. To obtain those, it is best to request from the Clerk of Court’s office at the courthouse where the case was concluded. 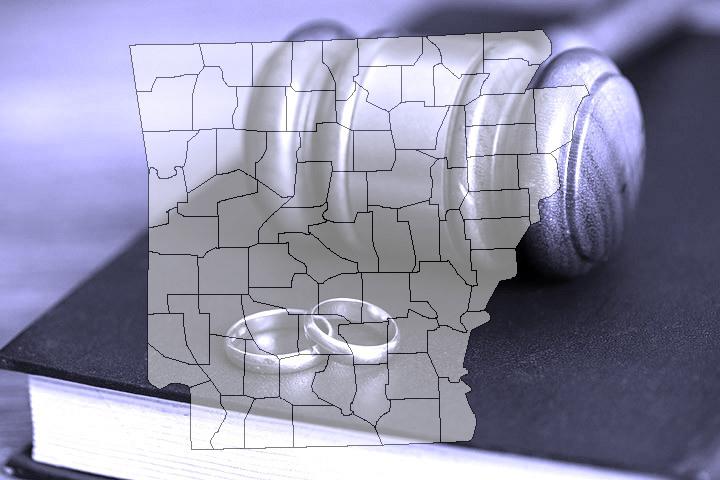