I Agree
How to Pay Traffic Tickets in Arkansas | ArkansasCourtRecords.us
Arkansas Court Records

What are Arkansas Traffic Tickets?

The Arkansas Department of Finance and Administration is responsible for maintaining driving records in the state. Failure to address a traffic ticket either by paying the indicated fine or contesting the ticket may result in an increased fine, arrest and possible jail time.

Records that are considered public may be accessible from some third-party websites. These websites often make searching more straightforward, as they are not limited by geographic location, and search engines on these sites may help when starting a search for a specific or multiple records. To begin using such a search engine on a third-party or government website, interested parties usually must provide:

What Does a Traffic Citation Mean?

How Do I Pay a Traffic Ticket in Arkansas?

Parties that wish to pay for a traffic ticket issued to them may do so by contacting the district court in the county where the traffic violation occured. Traffic tickets typically include a hearing date, and offenders who have either not paid the appropriate fines or contested the traffic ticket in court may end up with additional penalties such as a suspended driver’s license or a warrant issued for their arrest. In addition to this, certain district courts in the Arkansas Judiciary offer interested parties the option of paying for traffic tickets online.

Yes. The Arkansas Judiciary offers state residents the option of paying for traffic tickets online through its online court payment portal. However, this service is only available to selected district courts in the state.

How Do I Pay a Ticket Online in Arkansas?

Persons who wish to make online traffic ticket payments in Arkansas must verify that the district court in the county where the ticket was issued accepts online citation payments. Interested parties may do so via the web directory provided by the Arkansas Judiciary. If the appropriate court accepts online citation payments, the requestor may proceed to visit the Arkansas Judiciary’s online court payment portal and select the “Pay a Citation” option. The requesting party will be required to provide their full names and citation number or their driver’s license/state I. D. number and birth date. A service fee will be charged for payments made online.

Alternatively, parties that wish to pay for Arkansas traffic tickets online can utilize the services of a third-party aggregate site. Members of the public that want to use these third-party websites may be required to provide information that includes their full names, date of birth, the citation number on the traffic ticket, and the jurisdiction where the traffic ticket was issued.

What is the Arkansas Traffic Ticketing System?

Arkansas operates a point system which it uses to access and identify problem drivers in the state. Depending on the severity of the traffic violation, a range of points from 3–8 can be issued to the violator. When a driver’s record crosses 10 points, a warning letter is mailed to the driver by the Arkansas Department of Finance and Administration. The warning letter notifies the driver that additional traffic tickets and increased accumulated points could lead to license sanctions.

A hearing will be automatically scheduled when a driver gets up to 14 or more points on their record. When this happens, a Hearing Officer is assigned to the driver, who explains the laws and regulations concerning the Arkansas points system to the driver and the consequences of the accumulated points/violations on the driver’s record. Drivers that fail to attend the scheduled hearing will have their driving license automatically suspended.

How Do I Know if I Have a Traffic Ticket in Arkansas?

Alternatively, members of the public can also request for copies of driving records in person at:

Requestors can also access copies of driving records by mailing a request form and a signed release form (where necessary), to:

Department of Finance and Administration

Driving records are considered confidential in the state of Arkansas. Therefore, access to these records is restricted, and copies are only issued to requestors with a signed release form from the record’s subject. The signed release remains in effect for five years, unless a written withdrawal is filed by the party that authorized it.

Alternatively, requests for driving records can be made online via the Arkansas Online Driver Record Request System. Requestors will be required to provide the driver’s full name, date of birth, state-issued license number and license issue date, and the last five digits of the driver’s social security number.

How Can I Find a Lost Traffic Ticket in Arkansas?

Interested persons may find lost Arkansas traffic tickets by contacting the court in the jurisdiction where the ticket was issued.

How Can I Find Out How Much My Traffic Ticket is in Arkansas?

Parties that wish to find out the total fine issued on a traffic ticket may contact the county’s district court. Contact information can be retrieved from the online directory provided by the Arkansas Judiciary.

How Long Does a Traffic Ticket Stay on Your Record in Arkansas?

Demerit points in the state of Arkansas typically remain on the driver’s record for three years. Drivers with up to 14 points on their records also face the possibility of having their licenses suspended.

Parties that have had their driver’s license suspended must pay a reinstatement fee and pass all required tests before having their driving privileges reinstated. Reinstatement fees can be paid online. Queries may also be directed to the Arkansas Office of Driver Control at (501) 682–1631

Is a Summons Worse Than a Ticket in Arkansas?

Summons are not necessarily worse than traffic tickets. Traffic tickets typically don’t require the violator’s presence in court, except in situations that involve a serious offense, such as a DUI/DWI. In cases such as these, a summons is issued, which requires the violator’s appearance before a court. Failure to comply with a court summons at the hearing’s stipulated time may lead to criminal charges and possible jail time. 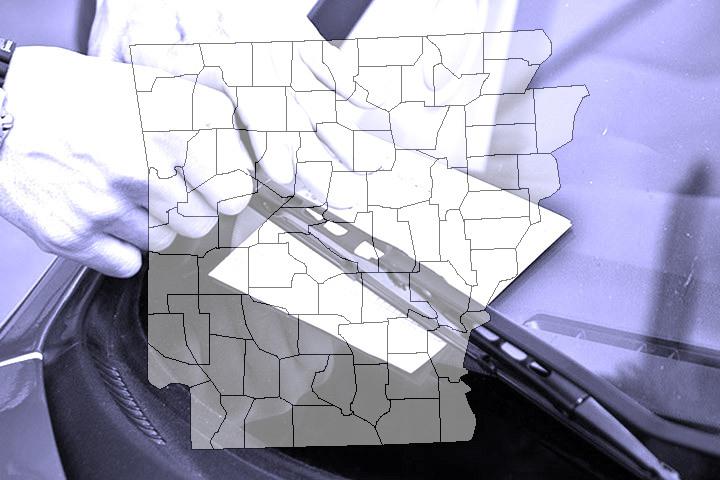