I Agree
How to Fight a Traffic Ticket in Arkansas | ArkansasCourtRecords.us
Arkansas Court Records

How To Fight a Traffic Ticket in Arkansas

In Arkansas, a traffic ticket serves as a notification for a traffic law violation. There are two ways a ticket receiver can respond; by paying the ticket and admitting guilt, or by appealing to the Arkansas Judicial System and contesting the ticket in court. There are various consequences for traffic violations in Arkansas, and they increase in severity based on the nature of the offense and the history of the offender. A person charged with a traffic violation is liable to financial loss by paying the traffic ticket fine, have demerit points added to the driver’s record, and attract any other penalty such as license revocation, license suspension, or jail time. A conviction can also have detrimental effects in the future as the conviction will stay on the offender’s driving record and can increase the severity of the punishment of another traffic violation committed in the future. Also, a traffic offense can cause an increase in the premium of the offender’s car insurance. The Arkansas Department of Finance and Administration is in charge of keeping files of traffic offenses.

Records that are considered public may be accessible from some third-party websites. These websites often make searching more straightforward, as they are not limited by geographic location, and search engines on these sites may help when starting a search for specific or multiple records. To begin using such a search engine on a third-party or government website, interested parties usually must provide:

Is it Worth it To Fight a Traffic Ticket in Arkansas?

Road users booked for minor traffic violations are eligible to fight the tickets, but violators who commit a major traffic crime cannot fight tickets and face criminal charges instead. Fighting a traffic ticket can prevent or lessen the negative consequences. However, fighting a traffic ticket may be financially inconvenient because of exorbitant attorney fees. If the case is lost, the offender will still pay the ticket fine along with any other court fees.

Ways to Fight a Traffic Ticket in Arkansas

The only way to fight a traffic ticket in Arkansas is to request a contested hearing and plead not guilty in the municipality’s traffic court. A contested hearing is an argument before a judge or magistrate disputing the fairness of a citation received. The two sides involved in a contested hearing are the ticketing officer or a representative for the police department who reinforces the ticket’s fairness and the opposing side (the accused violator), who will state why the citation is unnecessary.

To start a contested hearing, send a notification to the local municipal or district court of a desire to contest the ticket. Alleged traffic offenders can check the appropriate section at the back of the ticket and mail the notice to the court. The individual who received the ticket must appear in court to set a court date. The date setting process varies between counties in Arkansas. In some counties, the accused offender will appear before the clerk of the court to set a date, whereas, in some other counties, the accused violator has to attend an arraignment before a judge to formally enter a “not guilty” plea before to set a date. After picking the court date, both parties will appear in court and provide evidence as to why the claim is correct. The judge or magistrate will then give a pronouncement based on the evidence provided by each side at the hearing. If a party at the argument is unsatisfied with the pronouncement of the magistrate or judge, appeal to a higher judicial authority.

How To Fight a Traffic Ticket Without Going to Court

In Arkansas, concerned persons cannot contest a traffic ticket without going to court. A legal argument must ensue before a judge or magistrate establishes innocence for a traffic violation. All processes to prove the alleged offender innocent have to be administered by the court, including the arraignment, clerk hearing, and the judge hearing.

How Do You Get a Traffic Ticket Reduced in Arkansas

In Arkansas, traffic fines can be reduced if the alleged offender requests a mitigation hearing. A mitigation hearing is a formal admission of guilt before a judge in a bid to lessen the penalty of a traffic violation. Penalties can be decreased through fine reduction, negotiation of a monthly payment plan, or the assignment of an alternative punishment such as community service as a substitute for the fine payment. A mitigated hearing is not held to decide if the accused person is guilty or not. The hearing is an opportunity for the accused person to explain the circumstances surrounding the violation in the hope of a reduced punishment.

Can You Get a Speeding Ticket Dismissed in Arkansas

Yes, there are three ways to get a speeding ticket dismissed in Arkansas. The first is to be declared “not guilty” at a contested hearing. The pronouncement by a judge or magistrate acquits the accused person of the alleged violation and all other penalties associated with the traffic offense. Secondly, dismissal can occur if the ticketing officer or a police department representative does not appear at the contested hearing. If this happens, the judge or magistrate rules that the accused person is not responsible for any violation, and the ticket is dismissed. The final way of getting a ticket dismissed is by completing a Defensive Driving Course. The course certifies that the accused person is fit to drive safely and responsibly.

If the alleged offender admits guilt at the mitigation hearing or by paying the ticket, they will be required to face the full penalties prescribed by the court. This may include the addition of driving demerits on driving records, driving license suspension, or driving license revocation. A guilty plea entered at a mitigation hearing adds all penalties attributed to the violation except for payment of the fine. The traffic ticket’s fine may be lessened, negotiated for a monthly payment, or substituted for another punishment.

How to Find a Traffic Ticket Attorney in Arkansas 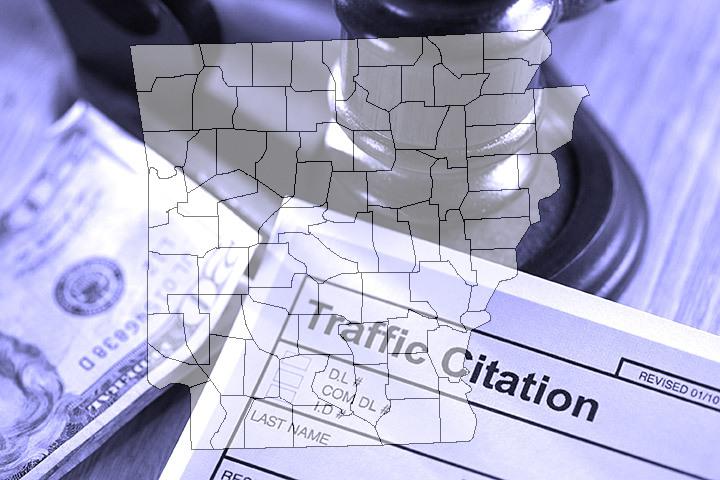